I knew the National Vocation Awareness Week was going to be a good week with the reception I had a St. Luke’s Parish and Mary Help of Christians Vietnamese Center.  Gathered in the rectory were many active parishioners and many young adults.  Together with Fr. Ramon and the Salesian priests on his staff, the parish and youth representatives started a lively exchange.  They had important questions and raised some hopes and dreams for their parish community.  In the end, the parishioners and young adults agreed to be the custodians of the Vocational Dimension of the parish and Center desiring to create a movement that reaches out to those in need and to help all the young in their care to be attentive to those needs. This was a terrific moment launching a very good week!

From Stockton, I moved on to the parishes in San Francisco.  I met with the priests and some parishioners at both Saints Peter and Paul and Corpus Christi.  Again, I found interest and concern for the Vocational Dimension of their ministries.  At Saints Peter and Paul, I met with many young people and young adults with Randy De Martini, the executive Director of the Club.  The young adults there also expressed the desire to keep the Vocation agenda on the books in their planning. At Corpus Christi, I heard the call for more involvement with the young adults and the concern about reaching into the universities.  Fr. Thomas Thodukulom, pastor, wondered why there were not more movements attracting young people and young adults.  A good conversation rose up there in the community.  I celebrated the Sunday evening mass which was the first mass to gather young adults and I met the coordinator of that effort who expressed a desire for more Salesian involvement and assistance.

I met with students and members of the CEPC for a second time at Salesian College Preparatory High School in Richmond.  Adrian Fulay first had me meet with the Campus Ministry Core Team, almost all alums of SYLCs for the past few years. They immediately signed on to be a team for the Vocational Dimension of the Campus.  Their reception there and at the CEPC were highlights of that busy day and the comments and questions raised at both of these gatherings were insightful and encouraging.

Moving on to Watsonville, I was greeted at St. Francis Salesian College Preparatory High School by a young student named Veronica.  Veronica volunteered to be the coordinator of all the Vocational Dimensions of the school and she was excited to lead me from classroom to classroom.  They set up a wonderful table in the quad filled with cookies and goodies to attract the young people during their lunch.  The place was filled with students who seemed to like the presentation on Vocations as “The Triple D’s of Discipleship.”  Comparing that triple D’s to the popular television show “Diners, Drive-ins, and Dive’s” I explained that finding out what God wanted of the young people can be uncovered by Dreams, Discernment, and Doing.  One of the students took his flyer and gave it to a young teacher on the campus telling him he should become a Salesian with the instruction, “just do the Triple D’s!”

From Watsonville I travelled back to Bellflower ready to move the “Triple D’s” into that community of students and educators.  They asked for a postponement until this coming Wednesday so I can meet with their core team in Campus Ministry, Christians Service, and ASP Officers along with the Campus Minister, Ken Flaherty, Dean of Student activities and affairs, Adan Jaramillo, and Activities Coordinator, Fernando Avila.  I asked Br. Quang Nguyen to join us for these upcoming meetings as well.

On Thursday of the Vocation Awareness Week, I went to Don Bosco Technical Institute where I addressed their Character Assembly.  Once again, I brought up the “Triple D’s of Discipleship: Dream, Discern, Do.” The students were amazingly attentive and very receptive.  More than one of the students came to express a desire to become a religious.  Moving on to the Student Youth Ministry Center, I met with the Core Team.  They had many ideas and also volunteered to sign onto Vocational Awareness for the School.  In their exchange, they mentioned that “A Vocation Retreat” would turn off most of the students.  Instead, they suggested, organizing an event that allows them to meet other students looking at their lives, have a oratory experience, and then sort out those who seemed interested.  That was duly noted and I suggested ways that we might do that.  They promised to brainstorm more events that could achieve that nudge toward Vocations.  They are ready and willing to serve and to keep watch on the Vocation dimension. 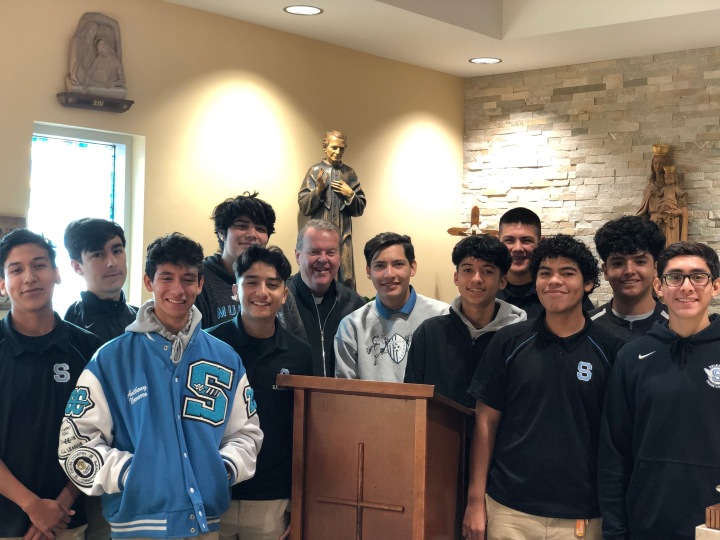 Bishop Mora Salesian High School warmly received me it the Learnings Common.  In that new and color-coordinated facility, I met with the Core Teams of ASB, Lettermen, Campus Ministry, and Christian Service.  They had a lot of ideas and I took down more notes.  The lively exchange moved from awareness of the poor in the area and forms of service to opportunities to meet the rest of the Salesian Youth in the province.  After signing up to become the Vocation Team at the school, I was led to many of the classrooms to present the “Triple D’s of Discipleship” once more.  I am grateful especially to Mr. Robbie Burke who organized the visit at Salesian.  And by the way, most of their core team members were SYLC slums as well!

Friday evening, at the invitation of Sr. Sydney Moss and Sr. Thuy Huong, the Candidates, the Pre-novices, Fr. Kristian and Fr. Fabian all gathered with the young ladies in FMA formation to address the various groups of youth at St. Thomas Parish in downtown Los Angeles.  We had a fun time presenting to various groups and playing at the Oratory until late!  The Candidates and Pre-Novices presented their stories of the “Triple D’s” in their lives, led various ice breakers, and joined in with the fun and the discussions.  More than one young adult there mentioned an interest in Salesian life.  More is to be followed there!

On Sunday morning, I concelebrated a mass at St. Mary’s Parish in Boyle Heights.  I met with Fr. Rafael, the pastor, and Fr. Beto the parochial Vicar.  They want me to come back and to meet the youth ministry team and the young adult teams.  At the mass, celebrated by Fr. Jim Nieblas, I was able to present “The Triple D’s of Discipleship” to the people.  I look forward to meetings with their youth and young adult team coordinators in the coming days.

I concluded my official trip by brining posters and flyers to St. Dominic Savio parish.  The plans are to sit down with Juan Carlos and the Parish Staff soon since their outreach is amazing and covers every age and ethnic group you can imagine.  That effort will be coordinated by Juan Carlos Montenegro. He will also be my link to the Volunteer Movement and to the Salesian Family Youth Center.

Welcome and thanks for visiting!